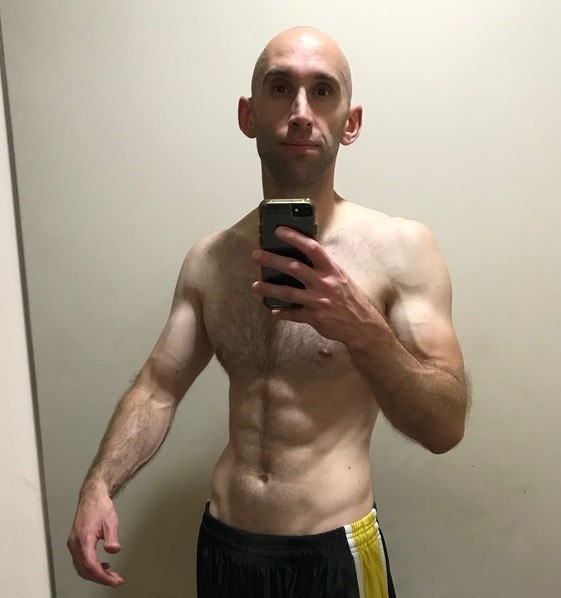 I took this photo ~2 weeks after I increased my calorie intake up to 3,000 calories per day with one cheat day per week. I’ve put on about 3lbs and due to higher carb intake, I think I’m retaining more water and thus look a little more bulky, at least for me. However, please note that this photo includes incredible lighting and a post-workout pump.

It’s been a while since I recorded a podcast on my own training and diet journey. In this episode, I talk about my own physical insecurities and new approach to diet to see if I can add more muscle mass whilst minimising fat gain. Since recording this, I was reminded that muscle gain, at my level, is a marathon, not a sprint. Therefore, I’m looking to continue this experiment for the rest of 2018 to see what happens. I will keep you posted!

This is my current A/B routine performed once every 3-5 days. The details of the protocol are provided in the podcast. For images and instruction for each exercise, please see Project Kratos and some links below:

This episode is brought to you by ARXFit.com, ARX are the most innovative, efficient and effective all-in-one exercise machines I have ever seen. I was really impressed with my ARX workout. The intensity and adaptive resistance were unlike anything I’ve ever experienced. I love how the machine enables you to increase the negative load to fatigue target muscles more quickly and I love how the workouts are effortlessly quantified. The software tracks maximum force output, rate of work, total amount of work done and more in front of you on-screen, allowing you to compete with your pervious performance, to give you and your clients real-time motivation.As well as being utilised by many HIT trainers to deliver highly effective and efficient workouts to their clients, ARX comes highly recommended by world-class trainers and brands including Bulletproof, Tony Robbins, and Ben Greenfield Fitness. To find out more about ARX and get $500 OFF install, please go to ARXfit.com and mention Corporate Warrior in the how did you hear about us field – ORDER HERE