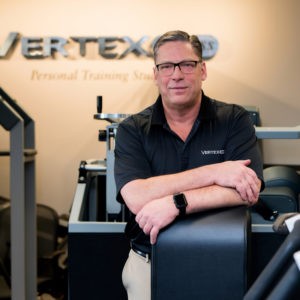 “You can have all of the knowledge in the world, but if you can’t get someone to understand, it really has no value” – Dwayne Wimmer

Dwayne Wimmer is the founder and trainer of Vertex Fitness Personal Training Studio located in Bryn Mawr, the heart of Philadelphia’s Main Line. With professionalism, expertise and personal attention as his hallmarks, and the utmost concern for his clients’ fitness and wellness as his vision, Dwayne fulfilled his ultimate dream in 2001 by opening his own personal training studio. His caring, patient yet guiding one-on-one approach encourages individuals to achieve their fitness goals at their own pace, all the while pushing them to their personal limits so they reach top physical condition.

Some of the most common questions and requests I get from listeners and clients within the Corporate Warrior Membership is ‘How do I get more clients?” and “How do I sell high intensity strength training?”.

Sales and business development is typically a big challenge for any business, but it can be particularly hard in the strength training industry. Especially when you’re competing with a myriad of health and fitness “solutions” that promise “instant” results.

In this episode, Dwayne and I discuss how to sell your high intensity strength training services and LOTS of different ways you can get new clients for your business and grow your bottom line, including:

Get more clients when you join HIT Business Membership

This episode is brought to you by VitalExercise.com, a one-of-kind personal training facility in the UK owned and run by world-class personal trainer, Ted Harrison. For over 30 years, Ted has been very successful in helping people achieve great results, and, if you’ve seen the blog posts for his episodes on this podcast, you’ve seen that he walks the walk. For 57, he looks amazing!

Operating from a HIT base, Ted uses an eclectic mix of training styles to optimise results for his clients. Ted put me through one of the best workouts of my life and is someone I go to for advice often.

To book a free consultation either at his facility in Essex in the UK or to find out more about his virtual coaching, which includes personalised training, nutritional and motivational advice, go here where you can fill in a contact form or phone Ted directly for more info.