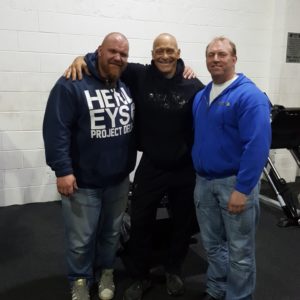 Craig Hartley is a high-intensity trainer and the owner of Potential, a high intensity training gym in Yorkshire, UK (Facebook). He’s also the author of Potential: The Keys to Unlocking Your Genetic Potential.
Craig’s expertise is in using high intensity strength training and tailored nutrition plans to help his clients build muscle and burn fat to prepare for bodybuilding contents, improve health and well-being.
In this episode, we discuss Craig’s staggering muscle gain over decades of training, his high-intensity workout routines (in immense detail), and how overtraining almost cost him his life.

Please note, I recorded this episode long before my episode with Dr Doug McGuff on “bulking up”. If you’re a regular listener you will notice that my thinking may seem out of sequence.

Get more clients for your HIT Business HERE

As well as being utilised by many HIT trainers to deliver highly effective and efficient workouts to their clients, ARX comes highly recommended by world-class trainers and brands including Bulletproof, Tony Robbins, and Ben Greenfield Fitness. To find out more about ARX and get $500 OFF install, please go to ARXFit.com and mention Corporate Warrior in the how did you hear about us field – Learn more HERE

(and we will let you know when a new episode is out).