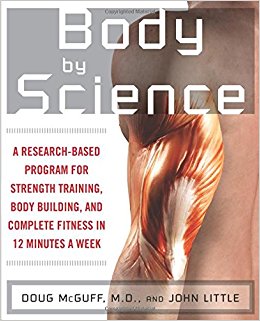 Body By Science by Dr Doug McGuff and John Little. Ryan Hall contributed to Chapters 3 and 8 regarding genetics.

Ryan A. Hall, BS, MS, Exercise Physiology, Certified Master Trainer, and major partner in Exercise Science, LLC has over 25 years of experience in the health and fitness industry. Ryan’s Exercise and Genetic Variability Lecture formed the basis of Chapter 8: The Genetic Factor in Body By Science by Dr Doug McGuff and John Little. He also contributed to Chapter 3: The Dose/Response Relationship of Exercise.

This is Part 2. For Part 1, which I highly recommend you listen to first, please click here. Please note – In this episode, I talk about my confusion around effective diets for optimal body composition. I’ve since found that Ted Naiman’s recent presentation on Insulin Resistance (coupled with our recent discussion – coming soon!) has been incredibly helpful in providing some clarity!

The studies Ryan mentioned will be added to this blog post at a later date.

In this episode, we cover:

This episode is sponsored by Hituni.com, the best online courses in high intensity strength training. I recently completed their personal trainer course to increase my knowledge and become certified in HIT. HITuni offer DIY courses to help you get better results from your training and personal training courses to help you start and grow your HIT Business. Visit HITuni.com and use the code “HIB10” to get 10% OFF.

X
When you're on the Resources Page, scroll down to find the Trainer Retention Strategy PDF

Do you prefer to read?

Gain access to a wealth of actionable insights
when you download podcast transcripts and resources for free.

(and we will let you know when a new episode is out).